The processes that make us human 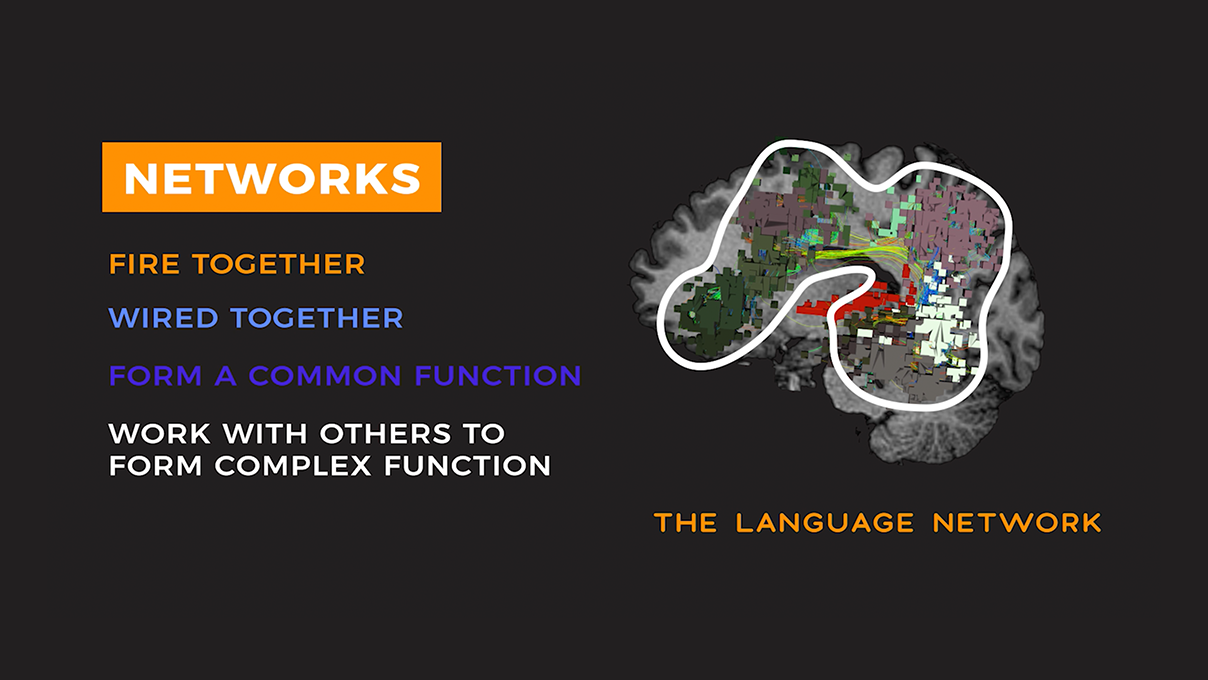 There is no such thing as unimportant, or non-eloquent, brain.

For decades, neuroscientists and clinicians have studied the brain attempting to pinpoint the regions that control specific functions.

This is the age old question of ‘What part of the brain is responsible for ___?’

For clinicians, this assists in determining where the source of certain disorders may originate and what, for example, should be preserved during brain surgery. While such study has revealed many critical areas of functions - like the motor cortex, an area arching across the top surface of the brain, and its role in movement - it oversimplifies the brain and limits our ability to understand its more complex roles. As a result, higher cognitive functions have remained mysterious, and the mental and neurological illnesses that present when they behave abnormally remain incredibly difficult to manage.

First and foremost, there are no areas solely responsible for complex functions like language, emotion, and attention, but multiple that are working in complex coordination - often presiding in completely different, non-adjacent parts of the brain. The manner in which they are connected is worth equal, if not more, attention, and together they form brain networks.

Through this, the field of Connectomics has recently elucidated many findings about how the brain works by study of its connections. We now know every part of the brain plays a role in brain function. Every brain area is part of a larger brain network.

The question then is, ‘What network of the brain is responsible for ___?’ and to follow up - ‘Where are the different areas of this network located, and how are they connected?’.

Being able to answer these questions is a relatively recent scientific achievement and doing so will help us answer more profound questions about how the brain functions and what makes us human.

In the 19th century, French neurosurgeon, Paul Broca, and German neurologist, Carl Wernicke, identified specific areas in the brain responsible for language that after sustaining injury would result in severe language problems. In Broca’s area, injury altered the capacity for speech production, while in Wernicke’s area, damage impacted the ability to comprehend language.

Since both Broca and Wernickes’ areas are critical for language processing, yet are found in different parts of the temporal lobe, they contributed to a critical shift in the understanding of neurobiology. The two separate areas are part of an interconnected network that operates as a whole to perform common tasks - much like electrical devices are wired together. Connecting them beneath the surface of the brain was the arcuate fasciculus, a bundle of white matter tracts, the wires, that when damaged also caused language impairment.

While this model of language has since been substantially iterated, it reflected a fundamental need to understand the relationships between different brain areas. In its simplest form, this means studying the gray matter (the "processors") and how it is connected and interacts through the white matter (the "wires").

The white matter in particular represents an extraordinarily complicated mass of wires that has come to be known as the "connectome".

Without advanced tools and techniques, using such a framework to discover new networks and apply them to routine clinical practice has been extremely challenging. Since the brain is incredibly complex, we need equally complex systems for analyzing it.

Today, using modern imaging, big data, and powerful computer processing, we can create a digital map of the human brain and through this vastly improve our understanding of its connections.

A recent major milestone by the Human Connectome Project was the development of a far more sophisticated map of the gray matter, the HCP Parcellation, which delineated 180 distinct areas in each of the brain’s hemispheres. This vastly improved the granularity and the accuracy of the ‘nodes’ of different brain networks from the century old Brodmann model which consisted of around 47 areas.

Find out more on the evolution of Connectomics here.

The HCP parcellation is generated through tractography, a technique that traces the white matter tracts, or wires, in the brain.

Though nearly impossible to model every connection in the brain, the HCP parcellation falls in “The Sweet Spot” of modern data analytics. The parcellation focuses on the main brain functions with a meaningful level of detail and explanation for how we function, while at the same time using a level of variability and complexity that can still be analyzed with the computer processing capabilities we have today.

While distinct in function, not all areas have an obvious observable function when examined in isolation. However in conjunction with others, they form processes that are understandable and meaningful to us - their conjoined activation predicting specific tasks and thoughts and reactions. This is analogous to a pixel lacking meaning until surrounded by others to form a full picture.

Furthermore, they did not always preside in anatomically obvious areas, with networks often spread sparsely across the brain. It is therefore insufficient to think about functional areas broadly without confirming their connective properties as even millimeters of inaccuracy can have an impact on an entirely different network.

Modern neuroimaging studies, such as functional MRI (fMRI), combined with data science techniques, like machine learning, then highlight regions that activate in correlative fashion when certain tasks or thoughts are occurring. This allows scientists to predict patterns of brain activity that precede a task, or predict the expected brain response when exposing subjects to certain stimuli. Each of these consistent patterns can then form a newly defined network responsible for a specific function with tasks of increasing complexity tending to form networks across many different areas of the brain.

Such analysis confirms that each part of the brain plays an important role in some function as each contributes to some network. For neurosurgeons, it begs the question: How can one effectively operate on or treat the brain while causing the least amount of lasting damage for a patient?

The answer is the same as it has always been: brain function is hierarchical, and the goal is to preserve areas that play the greatest roles in function and an individual’s quality of life. The difference now is: To save function, you need to save brain network function. And to get started, you need to know where to look.

Depending on the granularity of how a network is defined, there is no single number of brain networks but at the highest level, the brain can be thought to consist of seven main networks - sensorimotor system, visual system, limbic system, central executive network (CEN), default mode network (DMN), salience network, and dorsal attention network (DAN).

While some of these networks alone explain their namesake function entirely, most complex functions are the result of inter-network interactions. Deeper analysis delineates specific subnetworks responsible for specific tasks, comprising subcomponents of often multiple main networks.

One of the most important of these is the Language network which since the original Broca-Wernicke model has expanded dramatically - most recently including a previously unknown area called 55B which has been associated with muscle control when forming speech.

The Language Network as viewed in Omniscient software

To examine such networks practically, new software platforms, such as Quicktome, are making it possible to easily visualize the likely locations of important brain networks in routine clinical care.

To dive deeper into major known networks of the brain, click here.

With this new framework, both clinicians and researchers are far better equipped to translate functions of being human - speech, thought, emotion, action - into meaningfully explainable biological phenomena. Indeed, many more of the complex functions that we value are being explained through brain network analysis, and for those that are not, such technology has rapidly accelerated our ability to do so in the near future.

Such data and the ability, with modern technology, to digitally model a patient’s brain networks is already paving the way for incredible advances in neurological and neuropsychiatric care, and leading a charge for personalized1 brain medicine.

For example - mental illnesses need not be a nebulous ailment that can only be diagnosed through interviews and patient history. Instead, brain network biomarkers can highlight regions of anomaly and immediately and quantitatively provide the data to assist clinicians make decisions about therapy.

Additionally, the provision of personalized1 brain network maps offer extensive opportunities for advancement in neurosurgery. Neurosurgeons can now operate on a patient with greater certainty about the areas of the brain used for dominant network function. Steps can then be taken to preserve these important functional areas and their connections.

Finally, understanding brain networks is also leading us to innovative forms of treatment having revealed many of the plastic properties of brain network organization. Just as external stimuli and injury can cause changes in brain network function, so can technologies like non-invasive stimulation and targeted drug therapies can be used to correct them.

Find out more today about how Omniscient is turning monumental Connectomics research into practical research and medical toolkits.

Currently under development. Contact us to find out more.

Our enterprise-grade, HIPAA compliant research platform turns raw MRI data into detailed functional network maps of the human brain and is scalable for projects of all sizes.

Connectomics: How big data is changing everything we know about the brain

Connectomics for Neurologists, Psychologists, and Researchers