Request a Demo
Back to all blog posts
Brain Health

Epilepsy and the recurrent seizures which define the condition is one of the most disabling and unpredictable neurological conditions an individual can face. Temporal Lobe Epilepsy (TLE) is the most common form of epilepsy, afflicting over 50 million people worldwide1. Despite its prevalence,  a complete neurobiological understanding of the condition remains elusive. Generally speaking, we understand that during epilepsy, epileptogenic foci - or, specific brain regions and networks - misfire, causing seizure onset2,3.

Since neural connections and their communication are the underlying source of epileptic events, connectomics, a technique which evaluates how independent brain regions and networks are communicating, is uniquely positioned to assess the cause, development, and treatment response of this disorder. Indeed, emerging investigations leveraging connectomics have furthered our knowledge and understanding of epilepsy4-7.

Epilepsy is a broad class of disorders resulting in recurring seizures (abnormal electrical activity in the brain)8. There are many different causes for various forms of epilepsy, including genetics, acute illness, substance withdrawal, acute injury, and electrolyte imbalance8.

Although children and older adults are most susceptible to seizures, they can occur in people of any age group or demographic8. However, 80% of people living with epilepsy are from low and middle-income countries. With the limited accessibility to proper medical treatment that characterizes this at-risk demographic, it has been proposed that up to 70% of people with epilepsy could live seizure-free1.

Individual seizure events are complex and heterogeneous, but generally fit in one of three broad categories8:

Seizures largely result from an imbalance of the major inhibitory-excitatory neurotransmitter systems (GABA and Glutamate respectively) causing a cascade of neural activity and resulting in one of the three seizure types discussed above. However, the neural patterns of epileptic events are widespread, and the specific symptoms which present alongside seizures can only be fully understood by considering which brain networks are compromised10,11.

As generalized seizures engage the entire cortex, six of the seven major brain networks have been shown to play a role in their manifestation:

A wide range of anti-epileptic medications have been developed which counter and suppress the onset of seizures in epilepsy. Broadly, these medications work by suppressing neural activity, primarily within epileptogenic foci and networks.

The most prominent Resection surgery for treatment-resistant epilepsy is Laser Interstitial Thermal Therapy (LITT). This minimally-invasive surgery requires ablating discrete regions of epileptogenic foci, and can give patients life-changing relief from their seizures. However, successful remission of seizures is not guaranteed, and personalizing treatment strategy is quickly becoming a goal of modern neurosurgery.

Solutions such as connectomics have emerged as useful for epilepsy patient-selection and identifying those likely to respond to resective surgery, and will be discussed in the following sections24.

Alternative to neurosurgery, deep brain stimulation (DBS) and vagus nerve stimulation (VNS) seeks to treat epilepsy symptoms by regulating neurological activity to the brain. These treatments are generally less invasive than resective and ablative surgery, reducing costs associated with treatment as well as recovery time. However, their effectiveness is highly variable between individuals, and produces a gradual response, reducing seizures to a greater extent over time from beginning treatment25,26.

Connectomics holds utility in neuromodulatory treatments of epilepsy in both identifying accurate targets for DBS27, as well as tracking the treatment response through changes in underlying brain function over time26. 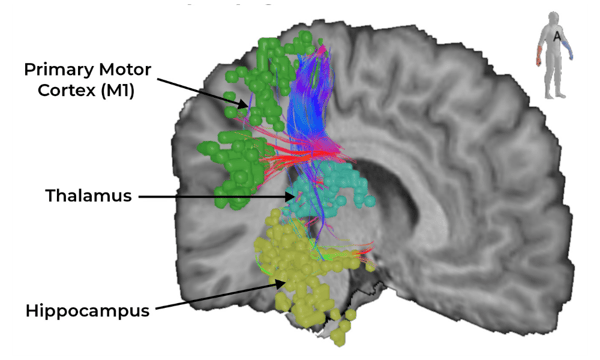 With modern neuroimaging techniques such as connectomics, we can examine whole-brain connectivity in the context of epilepsy. Using this technology alongside electroencephalography (EEG) and electrophysiology (EP) makes it possible to pinpoint the brain networks and subsystems affected by or causing epilepsy-related symptoms11,28.

Due to the varying nature of the disorder between individuals, personalized brain mapping may be a potential solution for identifying the worst-affected regions. For example, in a 2016 study by Donos et al., the authors paired intracranial electric stimulation with both functional and structural connectivity to investigate epilepsy-related brain changes29. Their combined map consisted of 70 regions per hemisphere outside the epileptic source, which could then be used to assess changes in neural function during epilepsy29. Such applications could help plan intractable epilepsy care.

Connectomic analyses can also be used to identify potential mechanisms that underlie epileptic subtypes. For example, TLE patients display reduced connectivity between cortical and subcortical networks, while individuals with benign epilepsy and centrotemporal spike often display greater connectivity between cortical networks only30. With the utilization of connectomics, we may generate a better understanding of the connectivity characteristics which define epileptic subtypes, producing greater diagnostic accuracy and further treatments31-33.

The Future of Epilepsy Therapy Through Connectomics

Recent research leveraging connectomic techniques not only demonstrates its potential in identifying where epilepsy is located in the brain, but also in predicting who will respond to different types of treatments24,34,35.

Alongside seizures, epilepsy has numerous cognitive symptoms, such as impaired motor, emotional, and executive function. These symptoms are directly tied to brain networks, namely the sensorimotor, limbic, and central-executive networks. Indeed, comorbid depression afflicts between 20-55% of epilepsy patients, and has shown to be directly tied with limbic system dysfunction36.

However within the context of epilepsy, brain networks and symptoms outside of seizures themselves have received relatively little attention. With advanced neuroimaging and connectomics, it may be possible to identify and better understand the brain network alterations associated with non-seizure components of epilepsy, enabling a more tailored and personalized continuum of epilepsy treatment and care35,36.

Connectomics enables a detailed structural and functional view of brain changes associated with the wide variety of symptoms which afflict epilepsy patients. Already demonstrating both predictive and therapeutic value, connectomic-approaches are beginning to be used to better understand and treat the symptoms of epilepsy, and in the future may help progress personalized treatment options6, 13, 24, 27, 29, 34, 36.