Watch a demo
Back to all blog posts
Neurosurgery

The absolute goal of intracerebral neurosurgery, especially when tumors are involved, is to provide optimal treatment whilst preserving patient quality-of-life1,2. How aggressive a surgeon can be in removing tumor-affected tissue without compromising regular functions like movement, cognition, or emotion, is often referred to as “onco-functional balance”3. In order to maximize onco-functional balance, an understanding of patient’s unique brain anatomy prior to surgery is required - a requirement met by personalized brain mapping4.

It is widely accepted that the greatest chance of extending life in tumor patients comes from supramaximal resection3,5. However, these approaches have also, albeit rarely, shown to lead to devastating and unpredicted functional consequences for patients after surgery6–9. These consequences can largely be explained by incidental or necessary damage to brain networks: connected groups of functional brain regions. Personalized brain mapping is a technique capable of locating these brain networks pre-surgically, and further, assess their composition post surgery to better understand how individual patients recover after surgery10–12.

Conceptually, brain networks originated in academia over 20 years ago, with the Default Mode Network (DMN) - the network responsible for at-rest consciousness - the first to be discovered13. Through ongoing research and academic insight, we now understand that unique brain networks hold critical roles in a range of executive functions including movement (sensorimotor network), cognition (central executive network), and vision (visual system), amongst others. Figure 1 shows each of the 7 major brain networks displayed in Quicktome software. Despite their lengthy history in academia, understanding of brain networks rarely reaches the surgical suite - primarily due to the inability to reliably define their location in an individual patient. Personalized brain mapping removes this barrier, for the first time bringing the forefront of academic understanding into a clinical relevant landscape.

Modern understanding of the brain anatomy emerged from the 2016 Human Connectome Project - a multisite, multidisciplinary project which produced an atlas of the brain comprised of 180 regions per hemisphere. Their nomenclature was later used by Baker, Briggs, and Sughrue to define each of the brain’s major networks in their “Connectomic Atlas of the Human Cerebrum”. 14,15 This atlas was both granular enough to discern the discrete function of each brain region, yet simple enough to be discussed and applied between institutions - enabling a common language for discussing brain anatomy.

Personalized brain mapping works by visualizing where each of the functional areas described within this atlas lie in an individual, rather than assuming that a single archetypal atlas is applicable in every case. By employing a machine-learning approach to process brain data, personalized brain mapping generates a unique anatomical map of each functional brain area and the tracts which connect them, regardless of variations in gyral folding patterns, intracranial volume, or structural pathology. An in-depth description of the method for conducting personalized brain mapping has been described in the work of Doyen et al. and their Structural Connectivity Atlas (SCA),16 however, can be summarized as:

Personalized brain mapping incorporates a methodology which innately promotes its use in surgical settings. First and foremost, the ability to visualize and freely segment named brain networks and associated tract bundles is of great importance in planning surgical trajectories. Additionally however, personalized brain mapping brings into the hands of a surgeon: 1) a greater clarity of brain network involvement in surgical pathology pre-operatively, 2) the ability to structurally inform maximal safe resection intraoperatively, and most importantly, 3) enhanced predictions of potential postoperative consequences, generating a complete informed consent for patients.

Pre-operative assessment of a patient’s brain networks gives surgeons a thorough understanding of how pathology has already impacted functional brain networks. Damage to these networks can cause deficits in the functions in which they underpin or manifest entirely new cognitive or neuropsychiatric disturbances.

Taking for example the three main cognitive brain networks – the Central Executive (CEN), Default Mode (DMN), and Salience Network (SN). The CEN drives goal-directed behavior, and conversely, the DMN activates during passive states of mind and at rest17-19. The balance of switching between these two networks during daily life is mediated by the SN20. Unsurprisingly, damage to or disconnection of the tracts between these major networks can cause impairments to higher-order cognitive abilities and cause symptoms associated with schizophrenia, depression, and anxiety21-23. The use of personalized brain mapping preoperatively informs neurosurgeons as to the precise location and involvement of these networks, among others, in their patient’s pathology, allowing them to plan accordingly to avoid and navigate these networks during surgery24–26.

The precise anatomical visualizations produced by personalized brain mapping empower neurosurgeons seeking a safe maximal resection. As they are informed by tracts connecting functional gray matter areas, not only can a surgeon use personalized brain mapping to see where a tumor site is entangled with functioning brain tissue, but also if adjacent gray matter has already become compromised by a tumor’s presence prior to surgery. This information not only informs surgeons which still-functioning tracts and networks to avoid in their approach, but also which already compromised tissue can be safely resected without leading to worse post-operative symptoms27-29.

Since the 1940’s, consent laws have been in place to ensure that patients are made fully aware of the potential risk-factors of intracranial procedures30. By displaying the location of brain networks and their connections relative to structural damage, personalized brain mapping enables a neurosurgeon to directly demonstrate to their patient where and why performing the elected surgical strategy could result in postsurgical deficits1,4. Instances where a patient has awoken from surgery with an unexplained deficit have shown to result from components of core brain networks being damaged in the surgical approach31-35.  What is of paramount importance in cases such as these is that patients are made aware of how their deficits relate to changes in their brain’s structure and function - which is made possible by personalized brain mapping36,37.

Omniscient Neurotechnology’s Quicktome software enables a personalized brain mapping solution which is accessible by collecting basic MRI scanning sequences. By loading an anatomical and Diffusion Weighted Imaging sequence into Quicktome, neurosurgeons can view and segment out individual brain networks and tracts associated with their patients structural pathology or symptom profile, or utilize the inbuilt pre-selection tools for damage isolated to any major lobe of the brain. The personalized brain maps generated by Quicktome are easily integrated with modern PACS systems, providing neurosurgeons with actionable insights prior to, during, and following their chosen surgical trajectory. 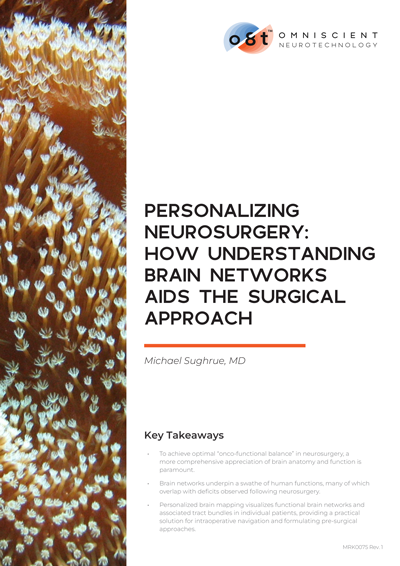 How we build personalized brain maps